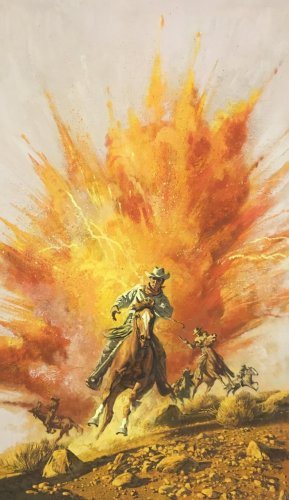 Description: Cowboys riding away from explosion

Comment: I’ll admit to never having read Mr. Hogan’s book. Here though we have, seems to me, a straight forward depiction of a central piece of action from the narrative. Sometimes that winds up being not quite enough for book publishers. If you look online at the published cover for the 1972 Signet edition, the explosion is replaced by the (potential) love interest. It’s easy to see that the publisher’s art department came to a conclusion about which would sell more books. Often in such cases, though I’d have to dig around to see if it’s true of Signet, they’d commission more that one artist to submit finished works... the idea being that whatever wasn’t chosen could reasonably readily be used for another cover at a later date. My suspicion is that this McCarthy was not used for another project because the action depicted was so specific to the novel.