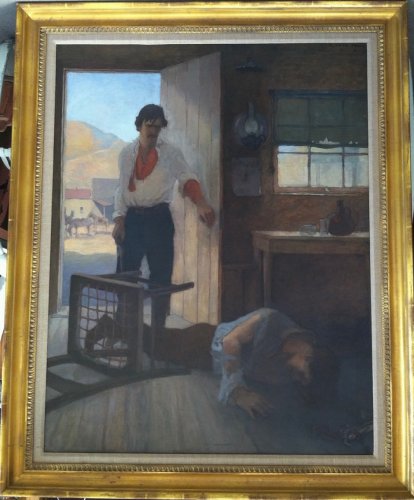 Comment: This has been here for quite a while. Primarily because I wanted to get as good a sense as possible of what precisely it is prior to putting it up on the website. So, have been researching this off and on for a number of years. I've come to the conclusion that with the exceptions of the figure on the floor, the overturned chair, likely the gun and maybe the signature… The rest of the composition is painted by Wyeth… and I don't think that that's simply wishful thinking.

There are several pieces to the puzzle, but I think that a small number of the opinions that I've solicited go the longest way towards telling the story.

Quoting first from Doug Allen, who wrote what was the definitive monograph on Wyeth in 1972.

“I think I can share a bit more information on the painting for you. Years ago, probably around 1960 this painting and the cover painting and the frontispiece for Wister's Padre Ignacio were for sale at Manados Bookshop in New York City, then owned by Helen Card. I remember talking with her about the works and how much they resembled the work of N.C. Wyeth. The color, composition, paint work and even the signature and spacing of dates reminds one of N.C.'s work. Apparently Zack Hogg was a student of N.C. for a time. I once talked to Andy about Zack Hogg and his time studying with N.C. Andy remembered the name, but with a twinkle in his eye sort of laughed about the question. My take on the answer was that N.C. had a big hand in Hogg's earliest published work such as Padre Ignacio and The Story of the Other Wise Man by Henry van Dyke. The illustration of the latter is a direct copy of a painting Wyeth did in 1912 for The Land of the Spirit by Thomas Nelson Page. I don't think N.C. would have allowed that type of plagiarism unless he had a hand in it.

When I was researching my book on N.C. back in the early 1970's, the Wyeth's were very helpful. In Andy and Betsy's gristmill was a large blanket chest that belonged to N.C. It was filled to the brim, with color proofs, calendars, prints, posters, etc. Among all this paper treasure, I remember seeing the proofs from Padre Ignacio. I believe N.C. certainly had part in the painting of these illustrations.”

Next, there's this… with which I don't completely agree, yet it is all a puzzle and something that begs for solving… This from a listing of a copy of the book offered for sale online:

This is the first book appearance of Zack Hogg, and there were at least three appearances in Country Gentleman including one color cover all are unmistakably by N.C. Wyeth. Most experts (including Douglas Allen) view these early Hogg appearances as done by the master's hand, the pseudonym adopted perhaps to disguise his work from Harpers (and others) during a time when the market for illustrators was contracting (Scribner's magazine had essentially ceased using illustration after about 1920). There were also a series of Etude magazine covers in 1928/1929 which were signed by Zack Hogg, but clearly by a different and lesser hand – this is perhaps the 'real' Zack Hogg, with a 3 paragraph ambiguous biography that states 'Zack Hogg' lived in Chadds Ford down the hill from the Wyeths. Given the poor quality of the 1928/1929 Etude work, it seems clear that there were 2 Zack Hoggs – the early 1925 version which in fact was done by N.C. Wyeth (perhaps on behalf of an untalented student), and the later 1929 version which is the work of an uninspired and not very good artist.”

Then finally there's this from Christine Podmaniczky of the Brandywine Museum and written in 2011.

“I can tell you that since 1992 I've done some on-again-off-again research on Zack Hogg (or Hoag or Hogge or Haig)… I have been able to ascertain that H was here in Chadds Ford from 1920-1926. (previous to that, by his own account he studied art in New York with William Chase, Thomas Fogarty and Vincent duMond.) I have found mention of his name in exactly 4 of Wyeth's letters, and in these cases the references (3) have been to him and his wife Lorraine as a babysitter for various Wyeth children and (1) as the raiser of large turkey that was shared at a meal with the Wyeth family in Oct. 1925. … After he left Chadds Ford, he headed west, finally ending up on the west coast as the depression struck. He worked first for Dean Cornwell who was painting murals for the Los Angeles [Public] Library. Later he worked for various movie studios. He died in 1983.

If you call up the painting “Brandywine Meadows” (NCW 1364) in our on-line catalogue raissone` you'll see a small cabin at the left of the landscape. Andrew Wyeth told me once that Zack Hogg had stayed in this cabin during his Chadds Ford days. (I've documented another place he stayed while here too.) I did ask AW if Zack Hogg was an alias his father had used. The answer was a simple no, Hogg was an illustrator in his own right.”

Personally, my history with this artwork goes back to about the early-1990s when it was consigned to Illustration House (where I worked at the time). I do not recall who the consignor was, but know there was a Kennedy Galleries label on back… a label that is still with the painting (though detached) by the way. IH sold it, I believe directly, to Charles Martignette the omnivorous Illustration collector. When Charles died in 2008 and I went to Florida to “help oversee” the appraisal of Charles' collection, there it was… There was a team of people unpacking boxes from the warehouse(s). I saw it first there from the back and knew it was something special… an opinion that was only underlined when I saw the front. Ultimately, as everyone knows, Charles' collection wound up going to Heritage Auctions. My consignor triumphed in the bidding.

One can look at N.C. Wyeth prices and come to the conclusion that ANY full size, full color oil on canvas in Wyeth's hand under $100,000 is a bona fide bargain. With essentially no comparable sales of Hogg's work at auction, it's hard to say what the proper price for Hogg's part of the composition should be. Purchase of the artwork includes copies of the above-referenced correspondence along with two copies of the Owen Wister book [one complete and one not… missing specifically the reproduction of this artwork, but inscribed and signed by Zack Hogg