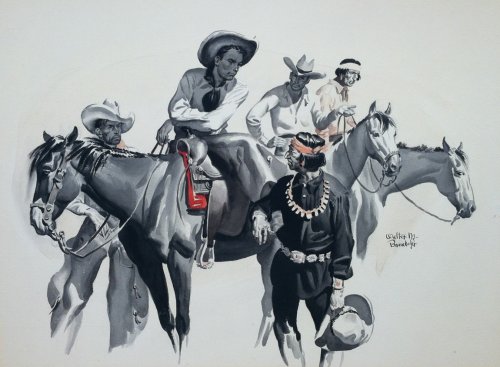 Description: Older Indian speaking to cowhand on horseback, others looking on

Comment: Surely by any yardstick, Walter Baumhofer was one of the most popular and prolific of the pulp magazine cover artists. Despite his standing, even in 1932, in the pulp arena, he longed for wider and what could be called more “mainstream” visibility. He wanted to break into the slicks, a goal that he eventually reached. Here we see an early effort in that regard. Generally magazines like this were anxious to have top-shelf talent at bargain prices. I was confident that I had at least the tearsheet and probably the entire magazine, but it isn't where it's supposed to be, so as of this moment I have to say that it's not included.