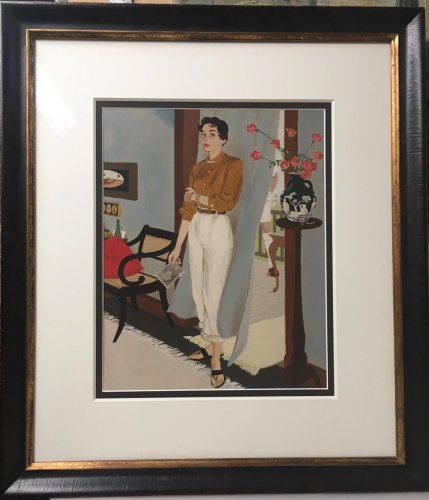 Provenance: Formerly in the personal collection of Walt Reed.

Comment: Consistently lauded as a great innovator, designer and all-around visual communicator, there's a lot to admire in Parker's work. To me, this is one of his best--- assuredly the best of its type to pass through TIA's portal. I particularly like how he keeps the viewer engaged. How'd he do that? Well, among other things… the strong verticals of the door jamb contrasted with the curves and ultimately strong diagonal leading us out onto the porch. It is, too, the large expanses of the walls and curtain and rugs contrasted with the rich details on, for example, the vase and ultimately the woman's face. A rather shelfworn copy of the magazine is included with the purchase. Here's your chance to own an iconic work by one of the pillars of 20th Century American illustration.