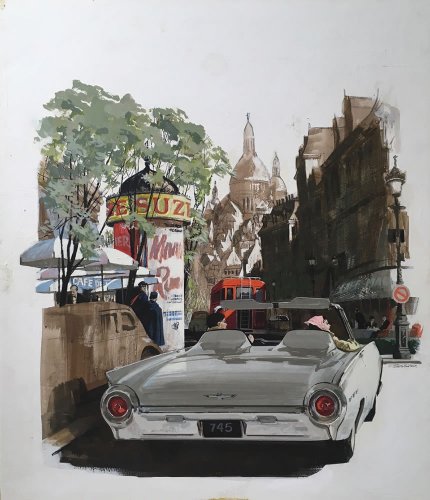 Provenance: From the artist's estate.

Comment: Blossom was one of the many popular illustrators who called southern Connecticut home in the 1950's through the 1970's. It was truly a hotbed of great innovative Illustration. Blossom did a lot of good, solid work for both a number of prominent advertisers as well as both magazines and paperback book publishers. This one's a bit of a conundrum… looks like it could have been for a brochure advertising the car; a travel magazine or even an illustration for a straightforward fictional work in any of hundreds of magazines. Notes in the margins/ on back indicate that it was to be reproduced at 38.5% which would have made it on the small side for a magazine. It's also marked as “F-5275 p. 62” Has a variety of dates on back from 11/10 – 11/13 of some year or other. Most frustrating of all is the fact that there's a rubber stamp of which the last two digits of the year are chopped off. Grrr. I'm sure that someone out there can put the pieces together on this.