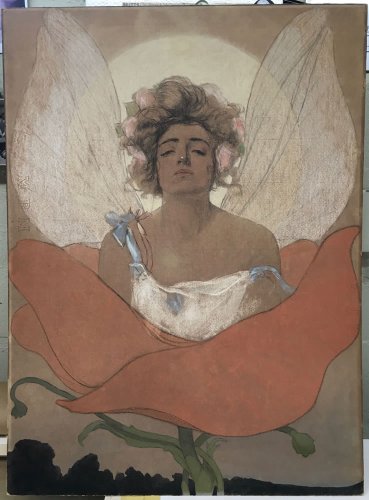 Provenance: A well-known New York art dealer since the mid-1990s.

Comment: While it's hard to say exactly what this is… one thing's for sure: I see no reason to doubt that it was done by JC Leyendecker. So, rather than say quite exactly where, why and when, let me give you my best interpretation… and Yes, I've spent a lot of time thinking about this in the past couple months.

Mid-Summer number of Century magazine in 1896. I recall hearing somewhere ages ago (though I can't seem to come up with a citation for the source at this point) that the art director at Century wanted the name of the magazine incorporated into the cover design for the famous 1896 competition. The printed version of the cover is shown on p. 24 of J.C. Leyendecker, American Imagist by Judy and Laurence Cutler, published in 2008.

When it came time for the magazine to go to press, why choose the published version rather than the piece offered here? A good question. I think (and again it’s a theory) that the piece I have comes across as too suggestive. Not only does the figure appear to be in a state of near-ecstasy, but the fact that she's is emerging from the poppy suggests drug use. That suggestion would have concerned the people at the magazine. This stands in distinction to they image that was published… showing a woman standing amidst poppies. The message conveyed is quite different.

To further establish it as by Leyendecker, take a look at the tip of her nose and compare it to the cover piece from the Americans Abroad book. If you've read this far, chances are that you have a copy of that on your shelf.

Then there's the watermark towards the left edge of the artwork. While the printed cover doesn’t show the watermark, even in the reproduction from the magazine cover reproduction, one can readily see the same pattern to the support. Surely Leyendecker wasn't the only one with access to such paper, but we can look at this detail as “...another brick in the wall.”

I did a little work trying to figure out the watermark, but didn’t get very far. Leyendecker would have been studying in Europe at the time of the Century project, so the manufacturer of the paper being based in Europe isn’t much of a stretch. Of course with two World Wars being fought there in the interim, it's not surprising that the trail of a company with (apparently) a fairly generic name has grown cold.

The drawing shows strong influences of Mucha… who according to sources was friendly with the Leyendecker brothers at the time. Shown too is a handwritten title from the back of the board… sorry I can’t say definitively whether that’s JCL’s writing or someone else’s. An expert I showed it to felt like it looks a lot like his writing. There’s more on back… I don’t honestly know what it means, but I’m imagining maybe entry #3 and the circled A as first choice of the judges. These details may be knowable but it would take a lot of research. Likewise the next photo below… Who’s "Mr. Crow" anyhow?

I asked the owner about the history of their ownership… All I know at this point is that they acquired it in 1995. Having been in New York in the 1990s, I do recall a guy who ran a second hand shop who personally had a very good stash of Leyendecker studies… My vague recollection is of his saying that he acquired them from someone who'd known JCL's sister Augusta. I also know that the people who owned this (the husband is no longer living) frequented that second hand shop. BUT, I can’t draw any real conclusions based on that limited amount of knowledge. If it's raining, then the streets are wet, but if the streets are wet, it's not necessarily raining.

The art is not signed ...neither though is the published Century cover. The published cover shows JCL’s name typeset and laid in. One more word: Were this signed, or were it in the hands of another dealer, it wouldn't be surprising to see it prices at three times the current listing.