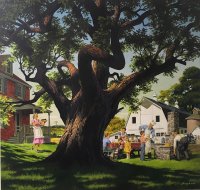 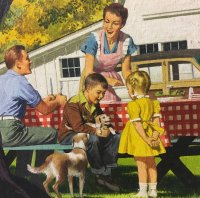 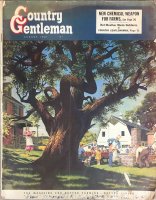 Description: Picnic at the farm

Comment: It's long been a head-scratcher for me that there's such a marked disparity between the selling prices for cover artwork from Country Gentleman versus that appearing on The Saturday Evening Post. What people like most about the Post is the 'slice of life' subject matter and the enduring professionalism of the artists… oh, and the fact that The Post appeared in x-number of millions of homes every week. Well, Country Gentleman also ticks all of those boxes (right down to it's having also been published by Curtis Publishing). The main difference then is that it was a monthly rather than a weekly and was aimed at a smaller and more specific segment of the reading public and so had a smaller circulation. Were this a Post cover it likely wouldn't last in Inventory long enough to get up on the website and the price would probably be at least six times and probably ten times what you see below. Beyond all that though, I have to say that this is such a smart and creative picture, using the massive gnarled tree to dominate the composition breathes reality into something that could easily have become ho-hum. A copy of the magazine accompanies purchase of the artwork.