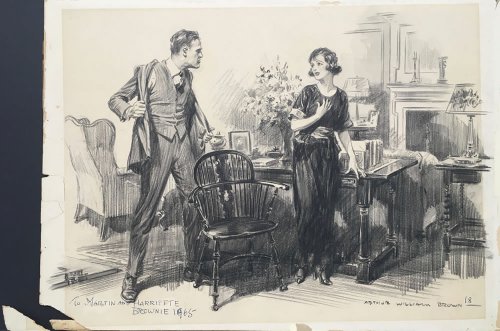 Comment: Part of what any illustrator did was use their own visual memory and other sources to come up with characters, poses and narrative for their assignments. Remember too that the 1910's and 1920's were far from a desert in terms of richness of visual input. Sure, we're bombarded by imagery today and it's easy to chalk that up to the internet, but in the first couple decades of the 20th century there were scores of places to see all manner of Illustration in print… a world in which we no longer live. In the case of this specific piece, you'll want to consider James Montgomery Flagg's “Tell That to the Marines!” recruitment poster that he famously created on the steps of The New York Public Library. While the Brown has been here for some time, it wasn't until the day that I wrote this description that I actually purchased a copy of the magazine to accompany, so while I don't yet have the caption, the magazine is still included in the purchase price. Inscribed to Martin and Harriette, 1965.