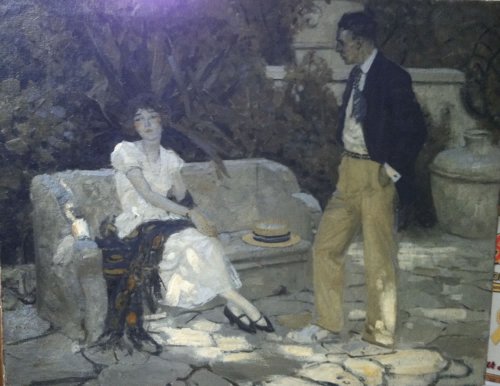 Description: Couple in a garden.

Comment: There are days that I think that if I read the same old bromide about Harvey Dunn being “a mountain of a man...”, I’ll run for the hills. Thing is that his career is peppered with instances of his making his own decisions... editors, publishers and clients be damned. Ultimately and particularly as someone who spent such a long time as a freelancer and hence beholden to the whims of clients, one really has to applaud his character. He wasn’t afraid to say its “My way or the highway...” One way in which this trait manifested itself was his reuse, or reworking, of earlier canvases. Here’s a case in point... this piece as it appears here was more than likely, not published. Oftentimes when he got things back from the publisher he’d either paint over the entire previous canvas with a new composition or rework parts of the composition to reflect his improvements of the moment. In this case, there is certainly another painting underneath what we now see. The thing (correction: ONE thing) I don’t know is what lies beneath. I will say this though, at this price level it might be worth it for someone to buy this, use the finest in Xray technology, figure out what’s beneath and make an informed decision of whether to leave this as it appears now or roll the dice to try to expose the layer beneath.