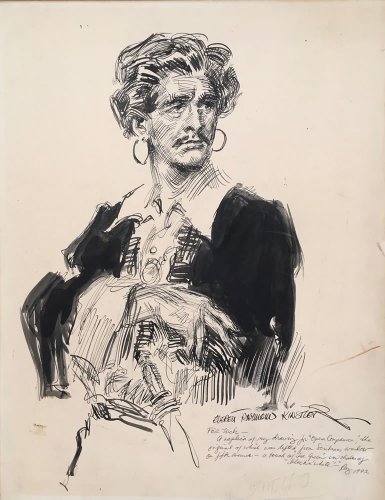 Inscription: “For Nick-- A replica of my drawing for “Opera Companion,” the original of which was lifted from Scribner's window on Fifth Avenue-- a touch of “Joe Green” in shades of 'black n' white!” – Ray 1973.

Provenance: Gifted in 1973 by the artist to Nick Meglin, fellow operagoer and major force behind MAD magazine. From Mr. Meglin's Estate directly

Comment: I usually try to say something that I think at least some of my readership will find interesting in the Comments area of my descriptions. This time between the Provenance statement and the Inscription there's not really all that much more to say…. Except that I'm old enough to have known them both. I wonder whatever became of the version “lifted from Scribner's window on Fifth Avenue.” Wouldn't it be great if it's included in a premier collection of American illustration art… personally I doubt its fate was quite that rosy. Another case where you needn't particularly be a Kinstler fan, or an opera buff to appreciate the picture. Includes the two volume paperback edition of George Martin’s The Opera Companion, published by Dodd, Mead and Company. Each of the two volumes are signed and inscribed to the former owner.