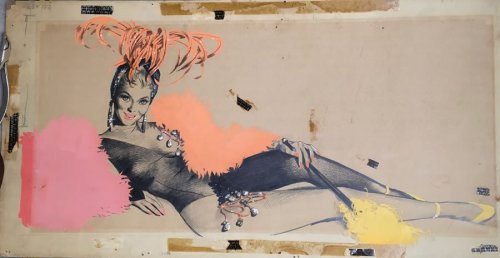 Comment: Sometimes I get close enough to figuring things out to taste them. This is a case in point. Based on another picture that also appeared in Cosmo, I thought I'd deciphered the numbering system for originals during this period. It's really not all that mysterious, I'm reading this as vol 135, #6… thus putting it in December 1953. Found a copy on Ebay and I thought… 'Just to be safe, let me see whether this image is in that magazine before I spend something like $30.' I asked the seller, and he looked through and did not find it. Now, there are still two main explanations… Either it was intended for that issue and for some reason never appeared in print… or at least never appeared in print in that issue… or… I know that some magazines went through periods of doing different editions for different markets. So, in theory, this could have appeared in, for example, the eastern edition while the Ebay seller has the western edition. It would take more research and ultimately probably won't effect the desirability all that much. I do though welcome information when people have it.