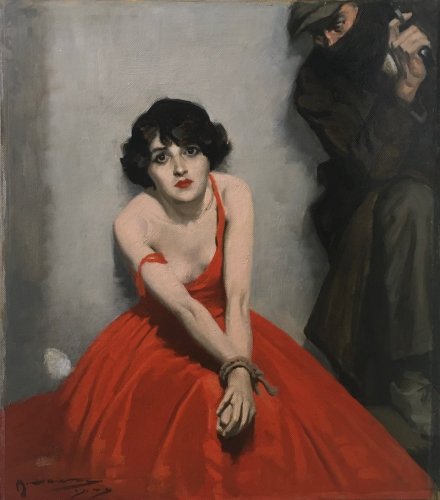 Print
Price: $11,500.00
Description:  Bound woman and captor
Comment:  When a client and I were initially trying to figure this one out, we first thought it was likely a cover for an American pulp magazine. After trying and failing in ferreting it out, we came to the conclusion that it was likely a bit too ‘subtle,’ assuming that’s the right word and that it wouldn’t quite have worked as an American pulp cover. Long story short… one of my consignors wound up with it and through diligence he figured it out. My initial impulse though was correct… missing an element to really work as a pulp cover on this side of the Atlantic. Man oh man though, what a well-painted thing… making us truly empathetic with the hostage. A true tour-de-force. I show an image of what the magazine cover looked like, but do not have the magazine itself to include.
Price: $11,500  (includes domestic shipping)