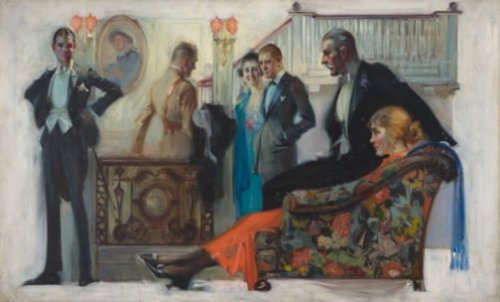 Comment: Hart, Schaffner & Marx commissioned an enormous amount of advertising illustration. They used a number of illustrators who could both deliver in a timely manner AND who were able to work in what could be called a “house style.” Gordon cut his teeth in the Fashion world and became associated with how people wanted to dress when they were at their best. Sure the clothes are neat, but to me it’s how the figures relate to one another and how they fit in the interior that makes this a great picture. This goes way beyond a simple depiction of how the smart set dressed. When this painting arrived, there was a plaque attached to the frame that identified it as being from 1924. But as a friend (and former employer) pointed out; by 1924, the idea of the military man home from the front and still in uniform was passe`. This indicating a date much closer to the end of the War. If anyone has a tearsheet of this, I’d love to know about it.