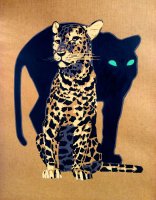 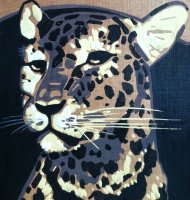 Comment: Just in case you're unfamiliar, Hohlwein was an icon of 20th century poster design. I bought this for myself in about 2006. Because it's never made it onto my walls, I guess I should think about selling it... that said, keeping it doesn't bother me. The published version of the poster appeared in 1912. The painting is certainly from the right period. This image does not match the printed poster precisely... primary difference is the lack of lettering and very slight variations to, for instance, the spots on the leopard. When I first acquired the piece, I decided to test the waters to see what kind of interest there might be among poster collectors. I approached a dealer in New York (he's the only dealer to whom I've shown it in person). He made me an offer that would have not included enough profit for my taste. Much more recently, I showed it to two major international auction houses who either sell posters or who've performed well with Hohlwein. Neither of them opted to accept it on consignment... essentially it boiled down to the fact that they didn't feel that they could guarantee their potential bidders that it was by Hohlwein, so not wanting to go out on a limb, they said Thanks but no thanks. I feel very confident in the authenticity of the artwork and would guarantee it in that if information comes forth establishing that it is not Hohlwein, I'll refund the purchase price and take it back... without time limit. For the sake of handy comparison, I'm attaching an image of the printed, published poster design.